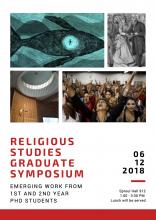 Lunch will be served.

The biblical book of Jonah, where a prophet complains that God is too merciful and is eaten and spat out by a giant fish, is widely considered a parody, in everything from scholarly commentaries to children’s books. But was the book of Jonah intended to be humorous, and Jonah a parody figure? Earlier religious traditions throughout history from Judaism to Islam have variously characterized Jonah as an honest prophet, a prophet whose anger was ultimately his downfall, and the prophet who would usher in the eschaton when he would catch Leviathan and create a banquet hall from the monstrous sea-beast.

Gynecological Goings-on at Oneida: God, Sex and the Question of Parity

The Oneida community was a Perfectionist Protestant commune in mid 19th century New York whose members were invested in founder John Noyes' ideas concerning social relations, including male continence, planned propagation, and "complex marriage" (a very flexible form of open marriage).  Traditional marriage, after all, had been biblically proven by Noyes not to be a feature of the Kingdom of Heaven any more than the need to have sexual shame, or sexual exclusivity.  And social harmony through a radically reformed approach to sexual relationships put the Oneidans one step closer to the perfected society they sought to achieve on Earth.  But how did this utopian vision of human relations actually play out in the quotidian life of the community?

Working primarily from an 1884 gynecological study done on the Oneida community, this presentation will take in to consideration the various sexual practices, data, and resident experience, contained in this document.  In the course of investigating this sometimes-provocative material, questions emerge around the sexual role of women at Oneida: what kind of freedom were they able to maintain in their choices of partners, and what was their expected sexual availability? Oneida was a community that prided itself on its fair treatment of women, and, on the equality amongst members that shared living and working in the spiritual commune naturally engendered.  Even so, from this (albeit limited) view of the community, the sexual expectations of women differed from those of men, and there were consequences for not complying.  Did patriarchal assumptions about women's roles at Oneida drive a bias in expectations of the women, there? And was the price for social control in this idealized spiritual community autonomous selfhood for its female residents?

Progressive Evangelicalism, a title as unsettled as the identity itself, seems to believe many things about its spiritual and communal aims. Armed with a liberal social agenda, those who call themselves “progressive” say they desire a world that is free of sexism, homophobia, poverty, and racism. Stepping into a progressive Evangelical congregation, however, one would likely find a mostly straight, mostly middle-class, and mostly white congregation.

For this talk, I will be exploring what tensions are present between what progressive white Evangelicals say they believe on Sunday and how they act out those stated beliefs after service throughout the rest of the week.

Through interviews and ethnographic study, I will share personal narratives from people of color in one such progressive evangelical community in Sacramento. These interviews reveal that progressive Evangelical congregations, while often well-meaning, are what I call "eggshell churches": churches whose structural containers are fragile and white. I will be exploring how the beliefs of these eggshell churches tend toward social justice motifs – included in their music, their messaging, and their sermons – but also build up around themselves structures and institutions of Christianity that are historically white. This whiteness, as I will explore, links progressive Evangelicalism to many other forms of American Christianity which came before and whose history is deeply embedded in a racialized identity. This talk will explore the importance of listening to stories from people of color so that these eggshell churches can transition from what one interviewee called “symbolic” to “authentic” expressions of socially progressive Christianity.

Brazilian Pentecostals are currently engaged in an intensifying religious conflict against Afro-Brazilian religions, namely Candomblé and Umbanda. Militant groups of Pentecostals attack Afro-Brazilian religions from the pulpits, in the media, and on the streets. The Universal Church of the Kingdom of God (or UCKG) is perhaps the most accused of carrying out hate speech and promoting violence against these vulnerable religions. This is because the UCKG uses its extensive media holdings to demonize Afro-Brazilian beliefs, practices, and deities in immensely public arenas.

Why is this happening? While there are undoubtedly various motivations behind Pentecostals' attacks, I posit that a dualist rhetoric of cosmic war is a significant contributor to the violence. Church leaders espouse narratives about good-battling-evil that support their own intolerant acts while aiding some adherents in generating and justifying violence on the ground. Afro-Brazilian religions are targeted not because Pentecostals believe they are false, but in part because they are thought to have real spiritual power that must be actively confronted in battle.

This presentation will characterize the conflict between extremist groups of Pentecostals and Afro-Brazilian religions in Brazil before honing in on the Universal Church of the Kingdom of God in particular. Drawing on fieldwork attending numerous Brazilian Pentecostal church services, I will link language and beliefs surrounding cosmic war to the intolerance being carried out by UCKG leadership and militant adherents throughout Brazil. Crucially, Pentecostal militancy and religious narratives about cosmic war extend far beyond the Brazilian context. As such, I will show that many elements of this local conflict are part of a much larger global trend in which Pentecostal and other forms of religious extremism embrace a language of war to aggressively undermine tolerance and pluralism.