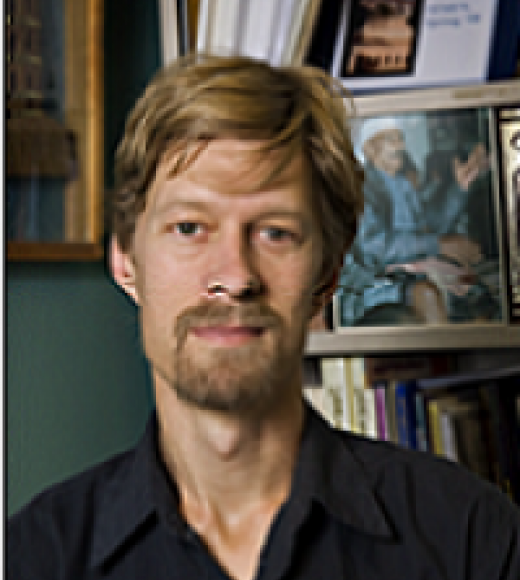 Flagg Miller is Professor of Religious Studies at the University of California at Davis.  Trained as a linguistic anthropologist, Dr. Miller’s research focuses on cultures of modern Muslim reform in the Middle East and especially Yemen.  His latest book is entitled The Audacious Ascetic: What the Bin Laden Tapes Reveal about Al-Qa`ida (Oxford University Press / Hurst, October 2015; www.audaciousascetic.com). Drawing primarily on an archive of over 1500 audiocassettes formerly deposited in Bin Laden’s house in Kandahar, Afghanistan, the book explores how Islamic cultural, legal, theological and linguistic vocabularies shaped militants’ understandings of al-Qa`ida.  Contesting the idea that al-Qa`ida’s primary enemy was, in fact, America and the West, the book argues that Western intelligence and terrorism experts collaborated with global media networks in managing Bin Ladin’s growing reputation in ways that were exploited by Osama and those who supported his militant vision.  His first book, The Moral Resonance of Arab Media: Audiocassette Poetry and Culture in Yemen (2007), examined how Yemenis have used traditional poetry and new media technologies to envision a productive relationship between tribalism and progressive Muslim reform.  Along with publications in a variety of professional journals including the American Ethnologist, the International Journal of Middle East Studies,the Journal of Language and Communication, and the Journal of Women’s History, Dr. Miller has written the preface to Poems from Guantánamo: The Detainees Speak (University of Iowa Press, 2007), a collection of translated poems written by detainees at Guantánamo Bay.

Reviews of The Audacious Ascetic:

Reviews of The Moral Resonance:

"On the Ethics of Graduated Disclosure in Contexts of War," in Anthropologists in the Securityscape: A Casebook of Stories in Identity, Practice and Ethics. Eds. R. Albro, M. Schoch-Spana, G. Marcus, L. McNamara. Walnut Creek, CA: Left Coast Press. (2011)

“The Ethics of Sound in the Osama Bin Laden Audiotape Collection: Lessons from the Art of an Egg,” Anthropology News, December issue. (2010)

"Forms of Suffering in Muslim Prison Poetry," in Poems from Guantánamo: The Detainees Speak. Ed. Marc Falkoff. The University of Iowa Press, 2007. Pp.7-16.

Entries for “Yemen,” “Aden,” and “Sanaa” in Encyclopedia of Popular Music of the World, vol.2: Locations. Continuum Press, United Kingdom, 2005.

Review of Mandana Limbert’s In the Time of Oil: Piety, Memory and Social Life in an Omani Town, in the International Journal of Middle East Studies, (forthcoming in 2012.)

Review of Janet McIntosh’s The Edge of Islam: Power, Personhood, and Ethnoreligious Boundaries on the Kenya Coast, in the American Anthropologist, December issue. (2010)

Review of Jillian Schwedler’s Faith in Moderation: Islamist Parties in Jordan and Yemen, in International Journal of Middle East Studies. (Forthcoming in 2008).

Review of Niloofar Haeri’s Sacred Language, Ordinary People: Dilemmas of Culture and Politics in Egypt, in Journal of Linguistic Anthropology, 17(2): 305-7. (2007)

Review of Martha Mundy's Domestic Government: Kinship, Community, and Polity in North Yemen, in Journal of the Anthropological Society of Oxford, 29(2): 182-5. (1998)

Flagg is currently working on two projects.  The first is a multi-country study of Muslim hunger strikes in the Arab world.  The second is a cultural history of a text-processing algorithm used by US counter-terrorism analysts to study and predict terrorist violence.